Climate Change is a Real Concern 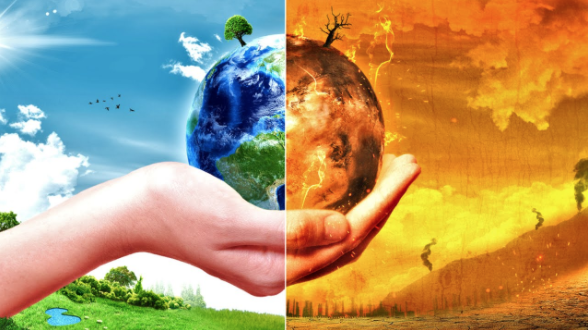 Climate change, (also commonly associated with the name “The Greenhouse Effect”), is affecting the everyday life of the citizens of America. The 80 degree winters and 100 degree summers in some parts of the country are affecting health, with heat strokes and sickness impacting a lot of people. Hurricanes and drier deserts are also plaguing the world. The hurricanes, which are stronger due to climate change, cost billions and billions of dollars of damage. The deserts are getting hotter and drier, making it more challenging for people in Egypt and in India to live. Parts of the west don’t have much water, so it’s even more difficult for them. Wildfires are burning throughout the west coast of the U.S. Firefighters are desperately trying to put out the fires. Scientists predict a rise of 2.5 to 10 degrees in the next century.

Some deny that climate change is happening, or deny that it’s caused by human activity. One of the deniers includes the President of the United States, Donald J. Trump. He says he was “quite cold” during July 2014. This shows people the ignorance of people and the person who says he could beat Rex Tillerson in an IQ test. This shows what our country has come to.

Climate change is a really threatening issue. It can be stopped by using alternate sources of energy, disposing of toxic wastes in a healthy manner, and not putting gasses in the air. Climate change just might be the end of our planet, but with strategic changes, we might just save our planet.